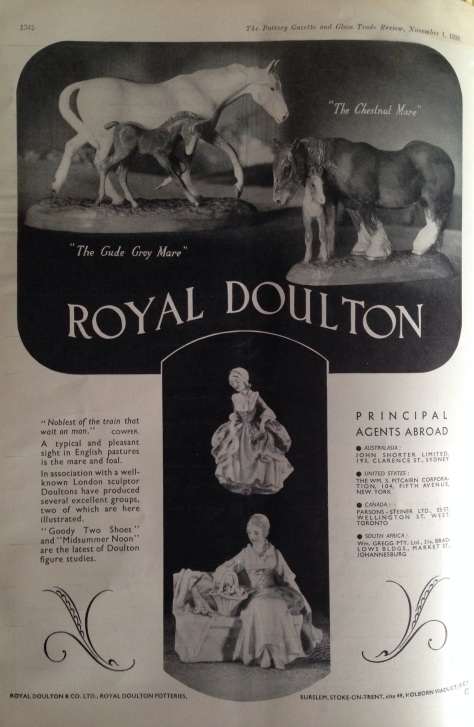 An advert from 1939 heralding the introduction if Doulton’s horse models by William Chance.

Doulton’s first horse models for the HN collection all featured riders, however, their first solo horse models introduced in 1940, were the work of William Chance, commissioned to launch a new range by Doulton. Chance was an established sculptor having exhibited widely including at the Royal Academy. He modelled from real life and his Doulton models proved popular and many were available in large, medium and small sizes, with the last remaining models being deleted in 1966. The varying sizes of horses available from this first series make it an interesting field to collect and together they make a great display.
Chance also created the special piece Monaveen for our present Queen, when she visited the Doulton factory in 1949 as the then Princess Elizabeth. Monaveen was a steeplechaser owned jointly by the Queen and the late Queen Mother and not produced by Doulton for sale. The piece was expertly painted by Eric Webster, whose long career at Doulton’s we looked at some time ago.
Horses continue to be produced by Doulton into recent times with new prestige pieces from Peggy Davies’ The Palio to the more recent Alexander the Great HN4431 as well as those produced in the early 1990’s as part of the DA range of animals.

To finish I thought you might all like to see this advert I found many years ago, stating that the famous French sculptor Gaston d’Illiers was responsible for the very rare study The Winner HN1407. This skilfully created model shows the horse in full gallop and straining every muscle. It is reputedly based on the horse Royal Doulton, owned by the Rousten Brothers of Auckland, New Zealand. 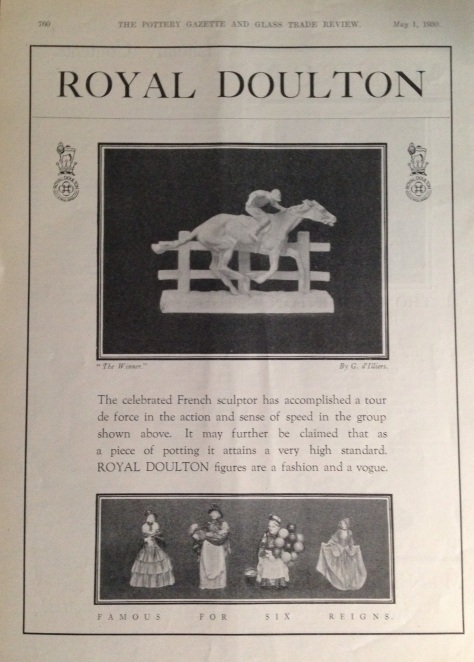