For collectors the beauty of Royal Doulton is the diversity of its wares. When it comes to collecting tobacco jars this statement is particularly pertinent! 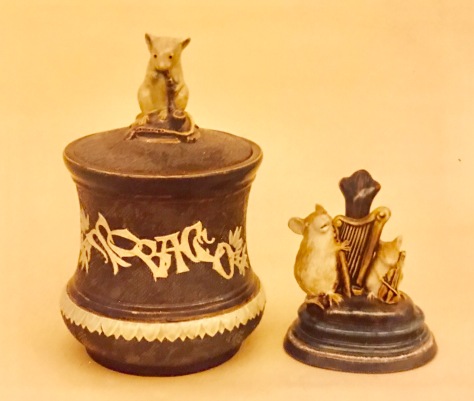 Whether you prefer the products of the Lambeth factory or the pottery examples from their Staffordshire factories – there is something to suit every collector.

Lambeth examples can be found by leading artists including the legendary George Tinworth, to repeat designs created by leading in-house artists, to more mass produced examples including Doulton’s famous Chiné technique. Rare novelty examples also exist such as the one illustrated modelled as a weight! 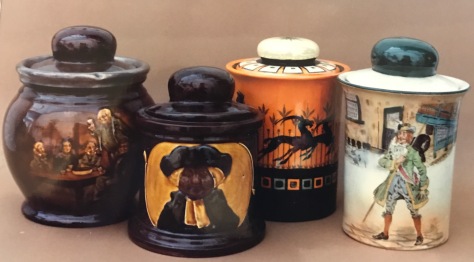 Pottery examples from Burslem typically fit into the following categories: art wares, Kingsware or seriesware as can be seen above.

Collecting tobacciana is a worldwide phenomenon so it is no surprise to see rare examples fetch high prices but a collection can be assembled of more modest varieties of Doulton wares such as the Chiné or Silicon examples above. 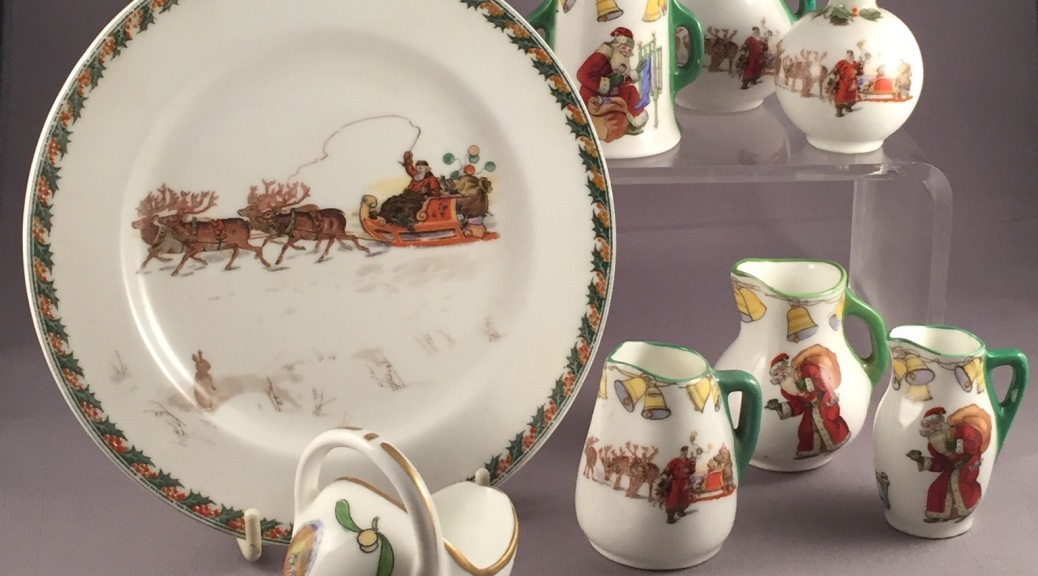 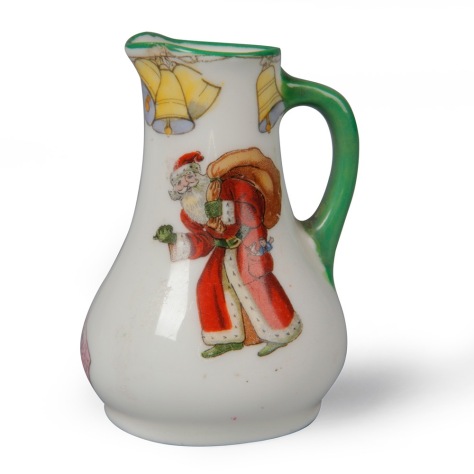 Nothing says Christmas quite like Father Christmas and Royal Doulton were astute enough to introduce a range of miniatures featuring Santa into their Seriesware range as early as 1904. 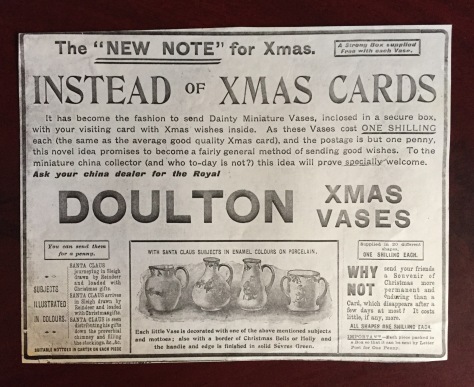 You can see from this 1905 advert that Doulton’s then advertising team were suggesting these miniatures could replace the sending of Christmas cards for the diminutive sum of one shilling in old money.

In total there were six Father Christmas scenes and a further two festive scenes of a turkey and geese that Louise Irvine in her Seriesware books has called Festive Fare. You can see an unusual turkey coal skuttle in the main picture and another angle of it below, yet the even more unusual geese I have only seen in blue and white rather than in what we might call festive colourings.

In terms of borders the Santa pieces have either bells or holly, whereas the turkey and geese images typically have a mixture of mistletoe and holly.

These two series had short production runs; the outbreak of WWI ceased their productions.

Merry Christmas to all! 🎄

A chance find of a portrait plaque featuring a well known portrait of Sir Henry Doulton has inspired this piece.

Doulton’s Photographic ware is rare with examples dating between 1893-1905 approximately. 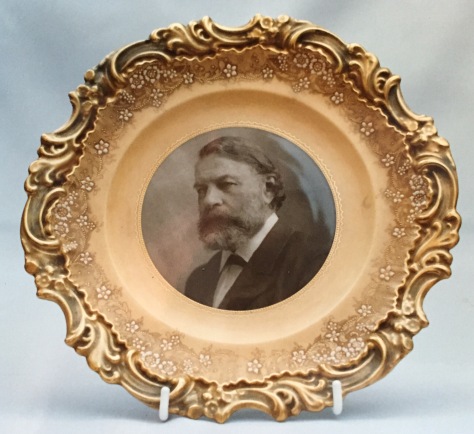 Early plate with a photographic image of Joseph Joachim, a popular violinist.

The method of transferring a photographic image on to transfer paper for application on to a china body was developed by John Slater and examples usually carry a simple Doulton mark and also the predictable “Slater’s Patent” stamp.

Subjects range from famous stage personalities of the time to other period celebrities.

This rather quaint figure produced in the early 1920’s is another advertising figure, but this time it’s purpose is to advertise the once popular Illustrated London News magazine. It covered all topical issues and as well as political comment, satire and stories, it also included full page prints for its readers of modern pictures. It was originally a weekly broadsheet but it move to bi-annual until it ceased production after the millennium.

The Beefeeter is a warder of the Tower of London and not a Yeoman of the Guard as is often stated. The Warder Beefeeter served the Towers prisioners and to protect the Crown Jewels but today they act more as tourist guides.

This Doulton personification of this famous London character holds an actual copy of the Illustrated London News from May 14 1842 , whose print is actually readable. Examples without any text do exist but it is the original that is most eagerly sought after.

This wonderfully detailed figure was commissioned by The Sketch magazine and consequently has no HN number or official title to her base as she was simply made for advertising purposes and not for sale to the general public. In the early years of the HN collection several advertising and publishing houses commissioned Doulton figures to advertise their products including The Perfect Pair HN581, which celebrates the amalgamation of Eve magazine and The Tatler from 1923 and another famous figure the Standing Beefeeter, which carries no official name or HN number, and who was made to advertise The Illustrated London News in 1924.

The figure of Miss Sketch appeared on the front of the magazine and Doulton’s study is a very faithful copy of this peddler lady. In her tray she carries miniature figures representing the subjects covered by the publication: a ballerina for the theatre: a jockey for sport: a cupid for love stories: a soldier for current affairs and a devil who represents devilish satire. 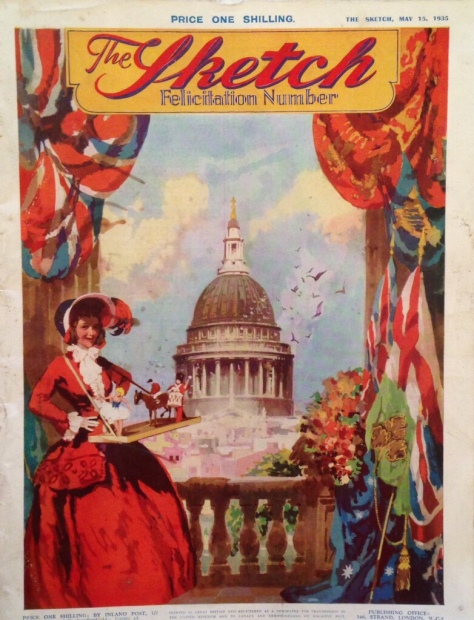 A letter has been discovered preserved inside of one of these rare figures. The letter from the Sketch magazine is dated 1927 and was sent presenting the winner of the magazine’s cross- word with their figurine as a prize. What a wonderful treat?

Starting to think ahead, here’s the perfect gift for Doulton lovers – a subscription to our magazine! If you haven’t yet subscribed to the Doulton Collectors Club magazine, here’s a glimpse inside Issue 3. 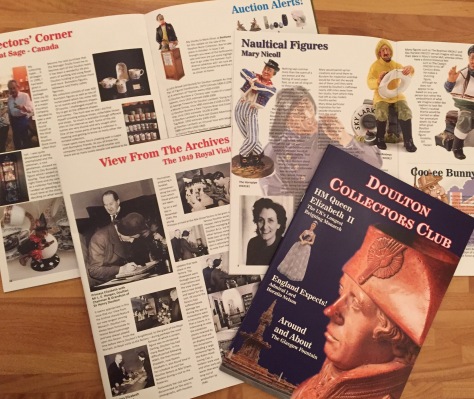 Issue 4 is about to go out around the world, so watch this space for a glimpse of the cover and to see what is in the next issue!

and register there by clicking on the Club tab. Alternatively you may subscribe via Seaway China!

Even today we are all aware of the work of Kate Greenaway be it as a book illustrator or artist. First introduced in 1976 with the figures Ruth, Carrie, Lori and Anna, and all skilfully  modelled by the great Peggy Davies, the children in Royal Doulton’s Kate Greenaway Collection are based upon illustrations by Kate that she in turn based upon her own Victorian childhood and upbringing.

Born in 1846, Kate first came to the public’s attention with her illustrations for Christmas cards. Then following a series of successful water colour exhibitions, she wrote and illustrated her Under the Window children’s book.

The legendary Peggy Davies at work.

The 18 children created by Doulton express the popularity she gave to bonnets, mop caps and high waisted children’s dresses with which she illustrated such famous books as The Birthday Book and Little Ann. Moreover, it was said at the time that she “dressed the children of two continents.” Reflecting her worldwide appeal.

Illustration from Doulton’s 1987 catalogue including the display stand.

Whilst the first 13 figures were modelled by Peggy between 1976-81 with annual introductions between these dates, it would be Pauline Parsons who completed the set between 1982-4 with five more children. The series was finally withdrawn at the end of 1987, three years after the last introduction of a new figure in 1984 with Pauline’s Ellen HN 3020.

In producing these charming child studies Doulton sought to recreate in china the ‘delicacy, tenderness and grace of Kate’s work.’ This attention to detail explains their enduring popularity among collectors to this day and naturally those with shorter production runs including Tom, Ellen and James are the most keenly sought after and carry the usual price premiums. Also popular with collectors is the display stand seen in the above catalogue illustration.

Perhaps most famous for his advertising posters for the likes of Beecham’s Pills and Coleman’s Mustard, however Doulton collectors are perhaps more familiar with John Hassall’s ‘naughty children’ and ‘The Twins’ designs that feature on Lambeth wares such as jardinières, vases and flasks.

Doulton ware from Burslem can also be found bearing his designs including the ‘Hooked’ kingsware flask featuring a humorous fisherman and his catch.

Hassall was known as the poster king at one point because of his advertising designs mentioned above, but also posters advertising popular tourist destinations here in the UK. 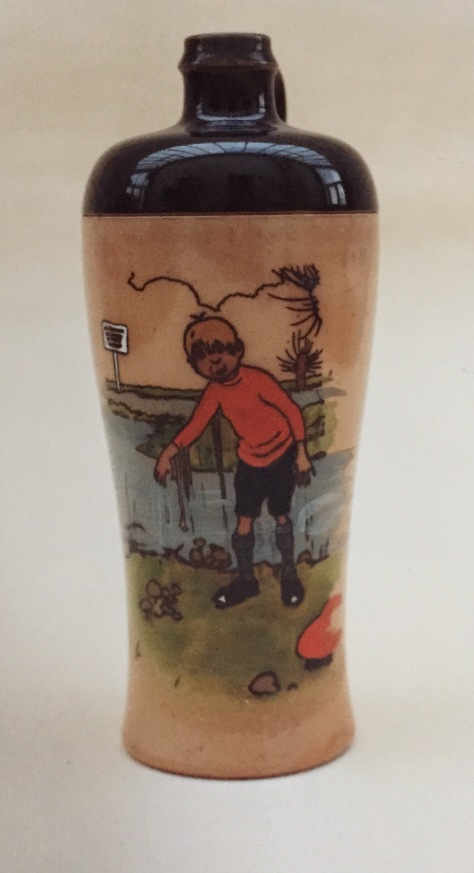 Collaborations between Hassall and Cecil Aldin can also be found, and these two artists were friends with Dudley Hardy, again another famous illustrator from the early 20th Century.

These charming small size fonts are often mistaken for just that – a mini church font but they are in fact so called fire wells. 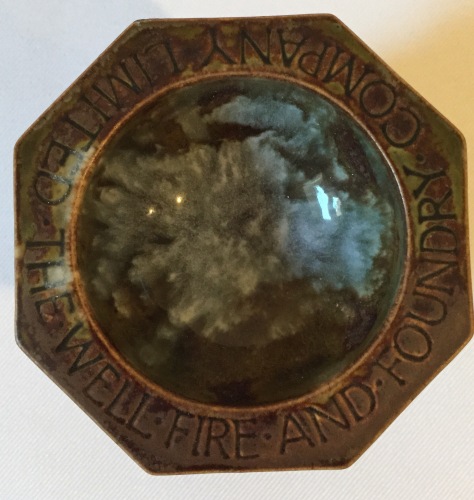 It is hard to imagine their actual function in that the two illustrated measure a diminutive 8cm tall and the full size versions I have seen around 20cm.

They have been previously described as examples of Doulton advertising for themselves, but the Well Fire and Foundry Co was a company of yesteryear as you can see from this advert found on the Internet. These items for the company date to the 1920’s and 1930’s. 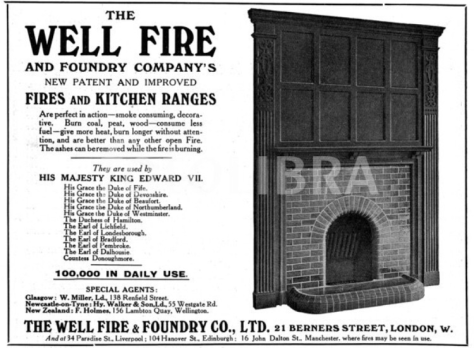 The darker of the two examples pictured above is an advertising piece for the Well Fire and Foundry Company Ltd and the base details options available.

The light green version in a matt glaze bears no indication of its use but simply the usual Doulton impressed mark, suggesting Doulton sold them too as fancies, or ashtrays, or indeed mini well fires!

Between 1992 and 2007, 13 special figures were produced for collectors to purchase exclusively at Doulton’s Roadshow events. The choice for the majority of figures certainly came from those most popular among collectors and which had enjoyed many years of popularity among collectors, in particular the dancing ladies so lovingly created by Peggy Davies.

As well as special backstamps in gold, these figures were issued with certificates of authenticity but otherwise they were issued in Doulton’s standard blue figure boxes of the time.

The figures in the Roadshow series were:

As you can see there were often multiple figures each year and there was almost a decade’s gap between the penultimate and the last figure. 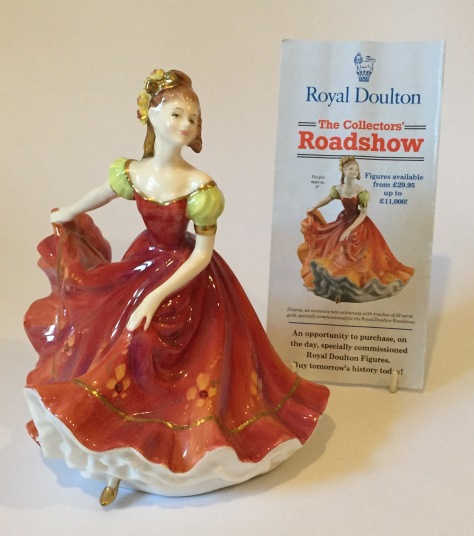 The great thing for collectors about these figures is the added detail in the painting that is so evident in the majority of pieces from Peggy Davies’ classic pretty ladies to the last figure by Valerie Annand and they stand out so well from the crowd in displays! Their time limited production makes them much more unusual than their main HN collection counterparts and some were even limited edition pieces such as Holly who was produced in a tiny number of 100 pieces!