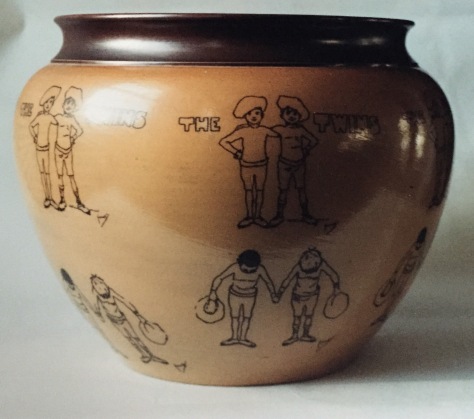 Perhaps most famous for his advertising posters for the likes of Beecham’s Pills and Coleman’s Mustard, however Doulton collectors are perhaps more familiar with John Hassall’s ‘naughty children’ and ‘The Twins’ designs that feature on Lambeth wares such as jardinières, vases and flasks.

Doulton ware from Burslem can also be found bearing his designs including the ‘Hooked’ kingsware flask featuring a humorous fisherman and his catch.

Hassall was known as the poster king at one point because of his advertising designs mentioned above, but also posters advertising popular tourist destinations here in the UK.

Collaborations between Hassall and Cecil Aldin can also be found, and these two artists were friends with Dudley Hardy, again another famous illustrator from the early 20th Century.