For me Doulton’s wall-masks take me right back to the 1930’s when they were the height of vogue. Of course it wasn’t just the Doulton factory who produced them, with continental factories and of course Clarice Cliff here in the UK producing wonderful examples too.
Far from being an easy collection to put together, it is possible to build a large collection of Doulton wall-masks. Naturally some are much rarer than others and some may be said to even be unique. I remember reading in the RDICC magazine about the so-called ‘balding old man’ and another mask by Richard Garbe of a lady made at Lambeth, that remain elusive to this day. 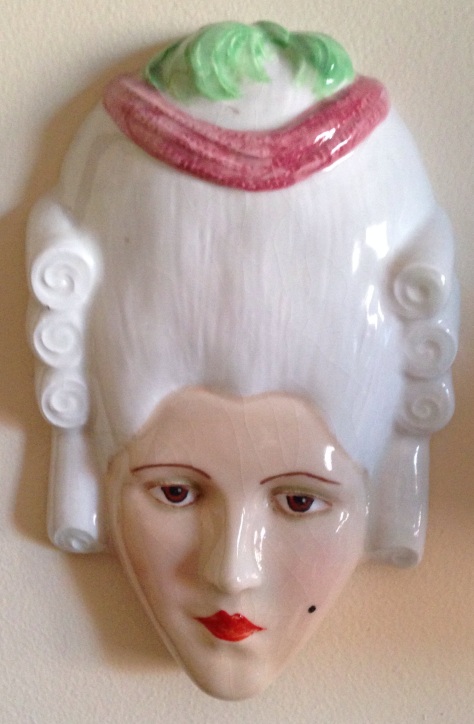 My personal preferences are for the jesters and lady faces. I once came across an example of Lady with Bobbed Hair – Greta Garbo HN1601 with gold rather than orange highlights. As always you can never predict what might turn up in the world of Doulton but remember caveat emptor! If it’s too good to be true, it probably is!
A more recent find of mine was HN1817, Madame Pompadour (above) not actually illustrated in Royal Doulton Figures.

Other characters stem not just from film such as Shirley Temple or Marlene Dietrich, but also myth such as the wonderful Friar of Orders Grey.
The artists behind these masks are not altogether certain – the Doulton records being somewhat sketchy and even published materials confuse artists. Leslie Harradine has of course been credited with the Sweet Anne mask because it was he who created the figure of the same name. Yet, a final 3 we must mention are the wonderful creations of Richard Garbe, commissioned by Doulton to produce items for the HN collection in the 1930’s. He provided three rare models: Lion of the East, St. Agnes and Fate. All three are very rare today, however, examples of them in unusual glazes have turned up including a striking, gilt version of Lion of the East.
These wall-masks are a fascinating area to collect and as they had a relatively short production run it will provide much entertainment searching out examples in large, medium and small sizes as many were produced – including the wonderful jesters!