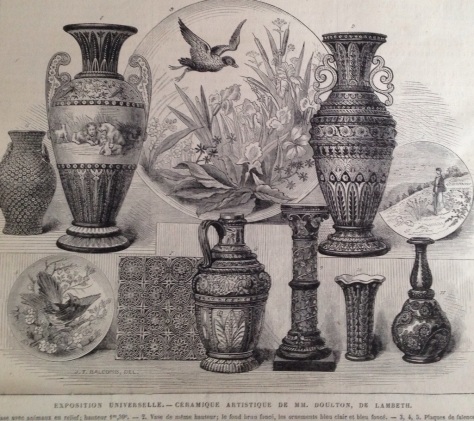 An early advertisement featuring a tile.

Tiles are another avenue of collecting that many Doulton collectors know very little about. However, if you were to ask tile collectors about Doulton tiles, they would tell you that there are some magnificent examples out there to collect.

A similar tile to the one in the advert above.

Originally produced in the 19th and early 20th century, the fashion for decorating great portions of buildings, both inside and out, in tiles fell out of fashion during the first half of the last century. 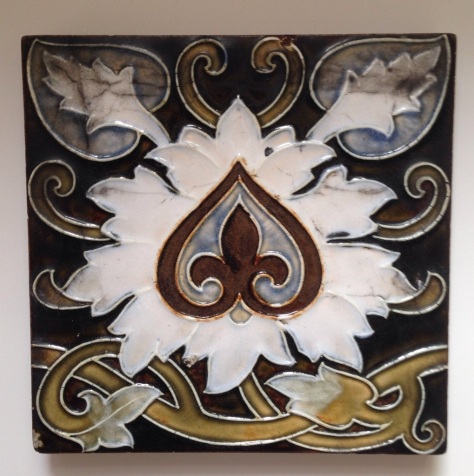 A good example of a tube lined tile.

Doulton tiles fall into two camps: architectural and art ware; and again divided into individual tiles and sets or panels.

I am sure many of you will have paid a visit to the food halls of Harrods in London and seen the wonderful art nouveau Doulton tiles by Neatby there or perhaps the wonderful Doulton art nouveau arcade in Norwich, but there are examples outside the UK too in Singapore’s railway station for example and countless hospitals around the world. 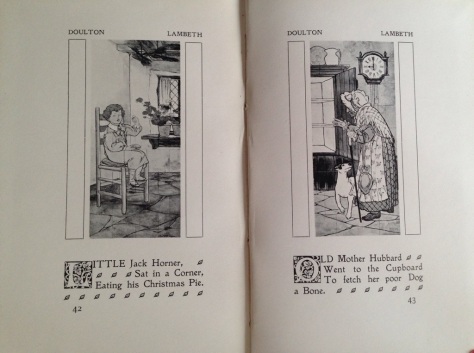 A double page from a book by Doulton from 1904 illustrating some Hospital panels installed by them to date.

As I have already mentioned there are countless tile panels in churches and hospitals around the world too designed by Doulton’s top artists including Margaret Thompson and William Rowe.

Yet, for collectors there are numerous designs in tiles to collect. Here are some that I have come across over the years, some artist pieces some production pieces. Nevertheless an interesting theme to collect! 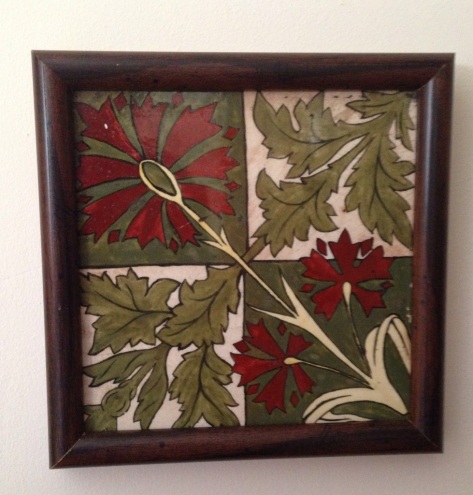 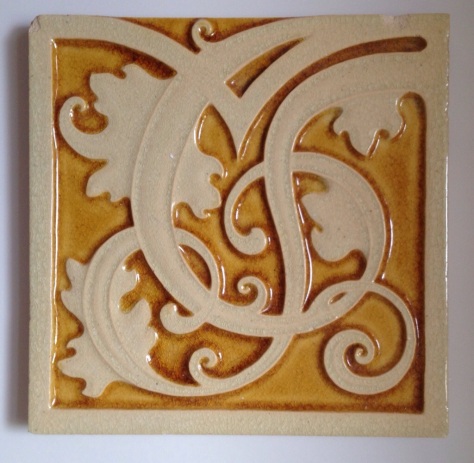 Velluma is a particularly rare ware today and pieces rarely turn up. The body has an almost parchment texture to it and the tea wares particularly are prone to damage. The colours are often quite muted, which adds to the vellum feel of this particular ware. These pieces were fired at high temperatures to enhance the soft effect desired. 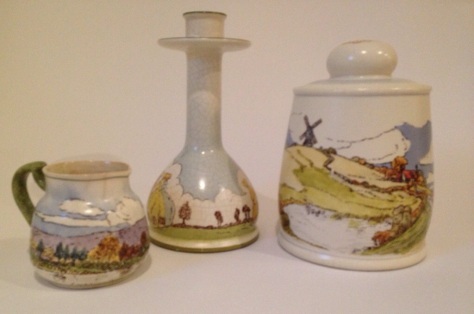 Three items of Velluma ware by the two of the main artists.

Unusually the pots were made at Burslem and then decorated at Lambeth to the designs of Arthur Pearce, William Rowe and Margaret Thompson. 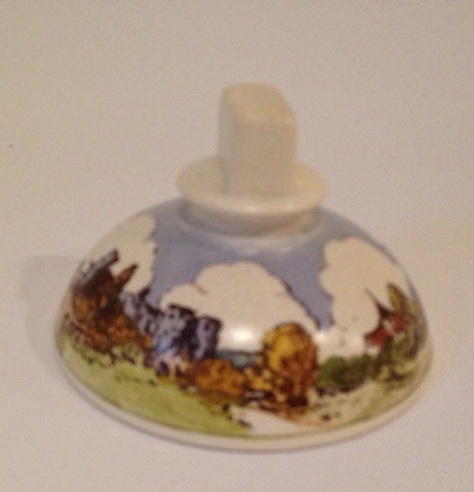 Through deduction it appears that Arthur Pearce was responsible for the castle and topographical scenes, William Rowe the countryside scenes and Margaret Thompson the crinoline ladies and fairies.

Three dishes with countryside or castle designs. Bamburgh Castle seems to have been a popular design as I have seen most items with this design.

Search facebook for: Doulton Collectors Club and ask to join the group! 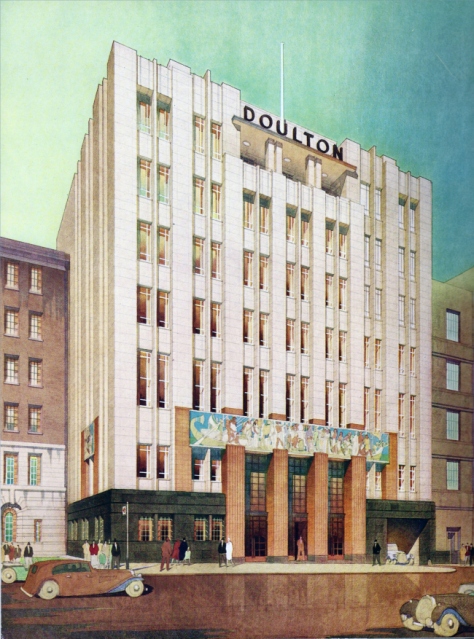 Simply search Facebook for the ‘Doulton Collectors Club’ and ask to join, then you can ask questions a view a variety of material from around the world!!!
What are you waiting for?

One final area I would like to touch on  is the Doulton Lambeth factory. Whilst worldwide acclaim had been found since Victorian times with the works of Tinworth and also Hannah Barlow  , their particular styles belonged to a bygone age and taste by the time the 1920’s had dawned.

Examples of Tinworths skill and artistry 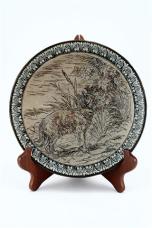 Without doubt the skill of these two great Lambeth artists cannot be denied, but as Leslie Harradine himself once commented, he preferred the amusing Tinworth mice to the dreary biblical plaques so preferred by Tinworth. The styles of these two artists hardly changed over the course of their careers, unlike many others whose designs remained fresh, even long after their productions. Consider the work of Mark Marshall  here.

In stark contrast to the grotesques he favoured either side of the turn of the 20th Century, here you can see  an example of his work which even today seem remarkably up to date.

Similarly we have Eliza or Elise Simmance. She is unarguably one of the most versatile of all the Lambeth artists. Consider here a selection of her works from the beginning to the end of her career.

Below is an excerpt  from a Doulton brochure from the deco period. As you can see there was an emphasis on colour and shape. More interestingly is the fact that Doulton chose to advertise just pieces which could be reproduced rather than artist pieces – it was after all in business to sell, sell, sell. These production pieces, or ‘Late Editions’ as they have become known were of course designed by Lambeth’s major artists including Mark Marshall, Francis Pope, Leslie Harradine and Margaret Thompson amongst others.

I am a particular fan of Margaret Thompson’s work, whether it be her Late Edition pieces, her wonderful faience work on vases and tiles or even her artist pieces in Stoneware. 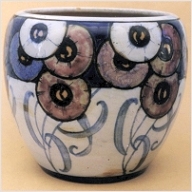 And there we draw to a close with out restrospective into Doulton wares from the 1920’s and 1930’s.  I hope that you have learned something new and also seen that in order to stay ahead of their rivals Doulton was ready to welcome the decadent 20’s, and change production accordingly.

I would like to thank Seaway China for the use of their picture library together with my own Ventafile, and of course if you have any questions relating to our talk or indeed anything else Doulton please just ask !