Doulton’s accurate representation of the famous American actress in the risqué play ‘Romance’ first performed in 1913 in the states before travelling to the UK two years later, proved a popular figure as you will see.

A Lambeth version of Doris Keane together with her later, miniature self.

Doris plays an Italian opera singer, an over the top character who always wears black and carries a pet monkey.

HN 96 with her carrying the pet monkey!

The story follows the ill fated love story of the opera singer and a clergyman. He gives her his mothers pearls and pendant – which can be seen in all versions of this figure – but she realises her past would ruin his career so the two part declaring their undying love.

An unusual gloss version of HN 90 sold at Bonhams.

Their love scenes, the role of the clergyman and Doris’ undressing on stage made the play a transatlantic success! When she arrived in England she was mobbed and Romance played for over a thousand performances in London alone!

This Lambeth version of Doris Keane above would eventually be remodelled and produced in china at Burslem under the name Rosamund and as you can see also above a miniature version was also issued. The two earlier Burslem versions of Doris Keane as Cavallini HN90 & 96 were a monumental 26-28 cms tall, typical of early figures in the HN collection.

As you know it is a real interest of mine to research where figures derive their inspiration. Those who have read my book ‘Reflections’ with Jocelyn, will have seen the section on the illustrator Jennie Harbour. 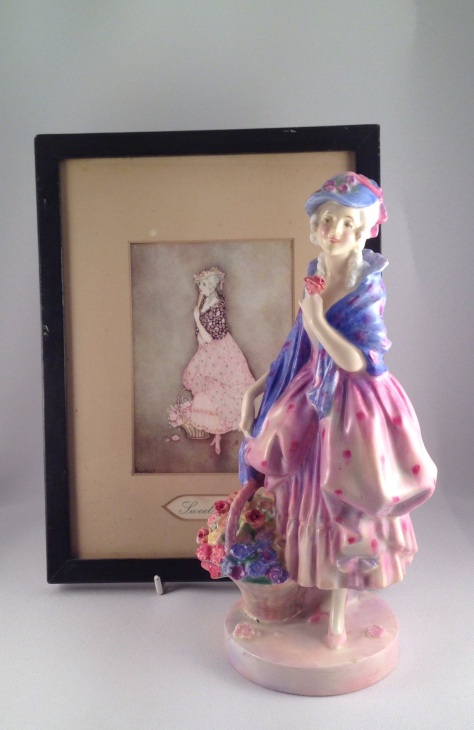 Very little is known about the illustrator but her work can be found on Tuck’s postcards as well as in many editions of deco books from the time. Her illustrations remain popular today around the world and framed, vintage prints can sell for a fair sum.

Back to Phyllis, as you can see she has been expertly interpreted from Jennie Harbour’s illustration ‘Sweet Nell’ by Harradine. Here she is as HN1486, although the most readily found version is HN1420 as it was clearly the most popular colourway. I have always felt that she makes the perfect partner to Dolly Vardon save for the base on Phyllis. Perhaps there is a version if Phyllis out there without a base. As we know modifications were frequent on these early figures, and we looked at how a stepped vase was added to Harradine’s Helen some time ago.

This unusual figure had a relatively short production run from 1931-37 and examples rarely turn up. She takes her inspiration from this Jennie Harbour picture titled ‘My Ladye’ from her ‘Victorian’ series for Raphael Tuck the card manufacturers. As you can see the original Harradine model has a base with a foot protruding from under her skirt, just like the original picture. This makes her 1.5cms taller than the production model. 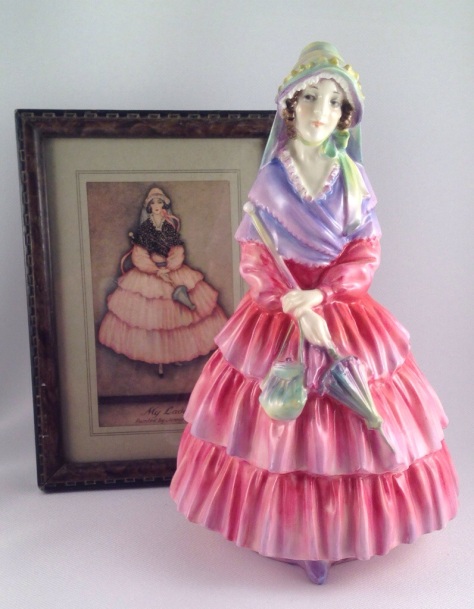 A prototype of Lady Clare pictured with her inspiration.

As well as HN1465 there is another colourway of Lady Clare that has emerged and there appear to be a handful of examples of this colour scheme in collections around the world. 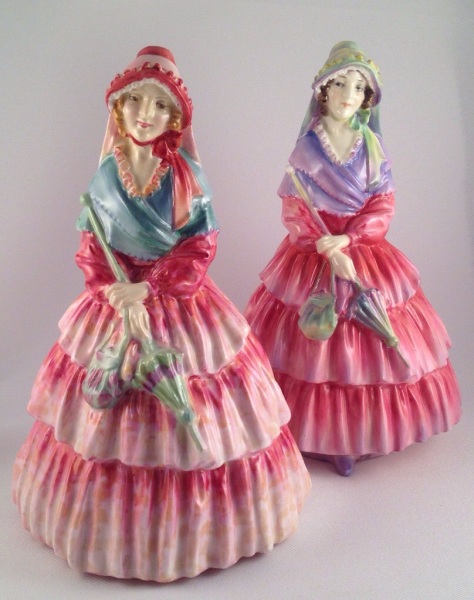 Two versions of Lady Clare; a colourway and a prototype.

Perhaps you also have variations of early figures? If do why not share with our ‘Doulton Collectors Club’ page on Facebook?

Inspired to share this next piece by a fellow collector who cherishes her Doulton figure Lizana, here is the inspiration behind her – a contemporary cigarette advert! Not quite PC today but the effort and detail put into advertising this brand of Abdulla cigarettes is to be marvelled, especially the rhyme at the bottom!

The contempory theatre greatly influence Noke’s figurine range. W S Penley was popular in his role in Charley’s Aunt by Brandon Thomas, where he plays an Oxford undergraduate who impersonates an “Aunt from Brazil” who is to act as chaperone to some young ladies  he and his friends wish to entertain. Charley’s Aunt ran for 1,466 performances after opening in 1913. On various anniversaries ladies in the audience were presented with a Doulton figurine of the main character commissioned by the author Brandon Thomas. About 500 – 600 of this commissioned figure were given away, together with a range of other souvenirs of the performances like those in the advert above. Early in his career in 1916, Noel Coward played the part of Charley.

A contemporary picture and version 2 of this unusual figure, modeled in an identical post and holding a cup of tea.

The figure was modelled by Albert Toft (1862 – 1949 ) who taught Leslie Harradine at Camberwell School of Art at evening classes when he was completing his apprenticeship at Doulton Lambeth. Toft  himself had studied at Stoke on Trent and  later at the Royal College of Art.

Another picture for you all to add to your lists of pictures that inspired figures is this charming child study by  an unknown artist ‘Pieperhoff’.

As Jocelyn and I were selecting the themes we would include in our book Reflections: Doulton Figures as a Mirror of their Times, it was inevitable that we could not include everything we had found.

Typical of this time, many unknown artists’ work was used for greetings cards, in a similar vein to those published by Raphael Tuck and Valentine & Co. that we have already looked at. 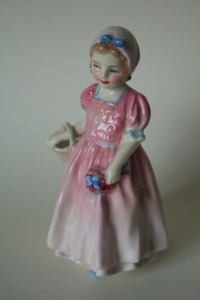 This particular illustration was clearly popular at the time (1930’s) as it can be found relatively readily and I have a miniature and a larger (30cm by 20cm) version.

Follow this link for a sample of pages and a brief explanation of the book!

Here are some pictures of an unusual Puff and Powder I once came across from Seaway China. She is decorated in the Bakst style like several of Harradine’s early figures of the 1920’s. Leon Bakst’s designs for the Ballet Russe were distinctive because of the use of contrasting fabrics placed together; something you can clearly see from this figure. Interestingly the piece is taken from a Raphael Tuck picture by Stanislaus Longley, an artist whose work Harradine regularly used as inspiration for figures but who is only credited with inspiring a handful of figures from the mid to late 1930’s rather than the 1920’s.
Here are the pictures to enjoy! 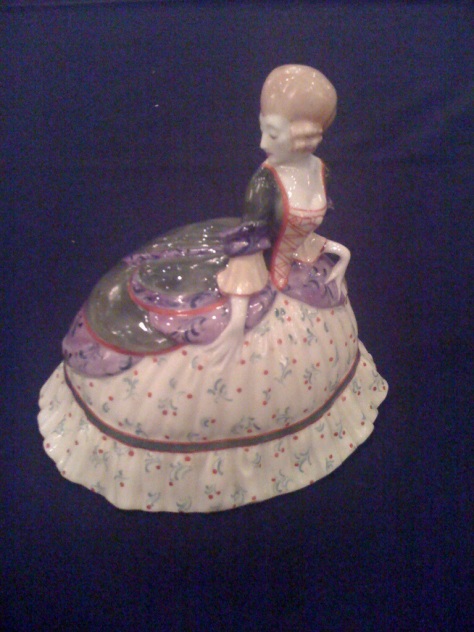 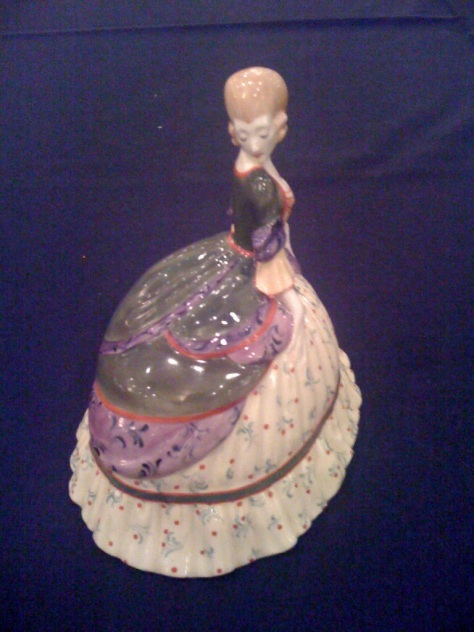 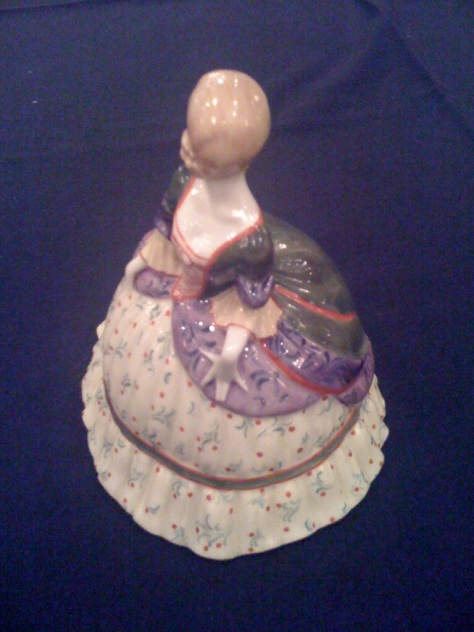 Here is another link, this time to part 2 of my account of the first 100 years of Doulton’s HN collection of figures, published naturally by Seaway China. 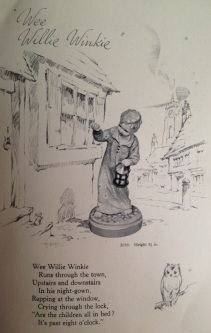 Some of Doulton’s earliest introductions to the HN range are inspired by lines from nursery rhymes. Consider Tittensor’s The Land of Nod HN56 or The Little Land HN63 also by Tittensor. In addition we have the very distinctive child models supplied to Doulton by Perugini in 1916, including Upon her Cheeks she Wept HN59, named after a line from Herrick’s “Upon Electra’s Tears” from the 17th Century.
Some of Doulton’s most popular nursery rhyme figures were created by Leslie Harradine and Peggy Davies. They are of course exquisitely modelled, as we would expect and are testament to the skill of all the Doulton artists involved in their production.

Here are some extracts from the same Doulton leaflet from 1949 advertising this new range of figures. 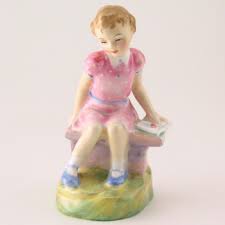 Peggy Davies’ Curly Locks HN2049 (above and below)

One final figure we can now add to this collection of Nursery Rhymes figures is this charming prototype for Miss Muffet, that no doubt did not go into production due to the success of Harradine’s earlier Miss Muffet HN1936 and HN1937. 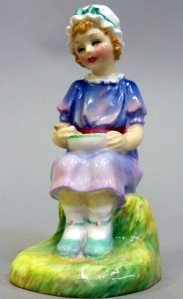 The idea of Nursey Rhyme inspired figures has continued into recent times with a new collection by Adrian Hughes from the 1980’s.

A collection of these Nursery Rhymes figures makes an eye catching display and evokes all those pleasant memories of childhood as we recollect those charming lines from our favourite nursery rhymes.