Browsing around a fair today I was amazed to still find unknown deco tableware patters such as the one below.

A more amazing find was this Poppy teaset, complete and in immaculate condition, dating to 1934. 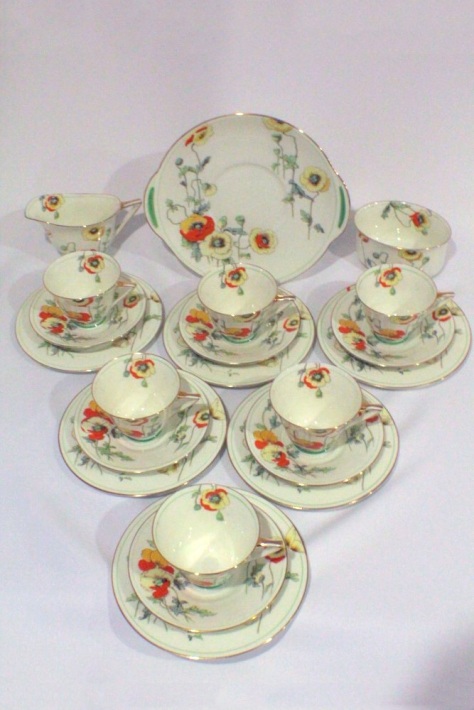 Even the names for some patterns are the epitome of their times! Including Eden, Lido and Syren! This pattern however is unnamed!

If only space permitted a collection of these stylish patterns! It is however, great to see that they are still popular!

A contemporary publicity shot for the Syren pattern.

Just as the many other pottery companies of the time, Doulton attempted to stay bang up to day whether it be imitating arts and crafts, designs, Victorian styles or geometric art deco patterns, yet, Doulton managed to climb to the top of the pile playing upon their heritage for producing quality items in modern tastes.

As well as producing items for the humble households up and down the country and around the world, Doulton also supplied some of the top hotels and restaurants with exclusive tablewares including The Savoy and Claridges in London. Certain patterns were targeted at particular markets such as the Maple Leaf pattern for Canada or the Wattle pattern for Australia.

Today it is possible to build up a vintage set of china whether in one particular pattern if you are patient or by mixing and matching the many styles available. In general it will be of interest for collectors to note that many of the deco dinner services were produced in earthenware, whilst the same pattern could be bought in bone china as a tea set. The reason being the durability of earthenware.

Another publicity shot this time featuring Eden on an earthenware body, note the wonderful toast rack!

Here is a set that Paul has unearthed recently, I love the simplistic art deco lines in silver and the classic lines of the shape it is on.

The Royalty pattern with its simplistic art deco platinum lines.

Another interesting thing to collect are the many tablecloths produced for Doulton featuring their most popular lines. I have a few examples including one to match Eden in the colourway above.

When you’ve built up a collection, use it as it will bring so much more pleasure! Happy collecting….