Even as I write this I am aware of the misnomer surrounding the title of this piece, as Doulton never referred to this series as such, but rather ‘Blue Figures’ was the title given. The label Blue Children refers to the popularity among collectors for pieces of this ware featuring children and they re-christened it.

Traditionally blue is the most popular colour for porcelain decoration and follows an ancient Chinese tradition that still pervades today. The scenes featuring children and also young women in various backdrops would have been purchased outside of Doulton and there are examples of what we know as Doulton scenes appearing on other manufacturers items from around this time. One such example is the factory Royal Bayreuth, whose wares bear an uncanny likeness to its Doulton counterparts.

However, what sets the Doulton series apart from its competitors is of course the quality. Doulton’s printing process allowed for finer detail and certainly subtler colour variations, as well as added detail by Doulton artists specifically to the faces of the characters and also the often detailed backgrounds.

A precise date of introduction of this ware is not known, although late Victorian is a time I think correct given the elaborate Victorian shapes of many of the earlier pieces, so ca. 1890. Signatures on these early pieces are also to be expected with J. Hughes being a common one. As was typical when the so-called ‘print and tint’ process was used, Doulton’s major artists used a pseudonym. Thus J. Hughes was in fact John Hugh Plant. Similar examples exist for other artists including E. Percy which is recorded as being either Edwin Wood or Percy Curnock. 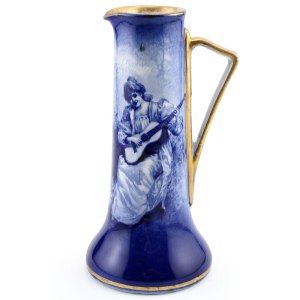 The end of the Victorian age, when Queen Victoria died in 1902 brought a change in popular tastes, which meant that the elaborate rococo shapes used for Blue Children pieces became much more simplified and the gilding too was often reduced to simply a gilded edging. Having said that, the shapes of vases etc…that were used are what I class as typically Doulton, in that they were not limited to this series but were used in seriesware production and also the top-end hand-painted wares.

Displays of Blue Children cannot fail to catch the eye and there are some fantastic collections around the world. With a never ending variety of shapes collectors are well catered for! Here is a display made by a friend in South Africa, notice the great shapes, I particularly like the square vases! 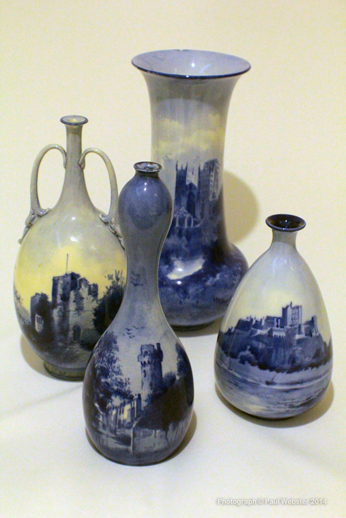 This is a little recognised area of collecting yet, they show the great potential Doulton of Burslem showed at the end of the 19th Century. There is very little to explain other than these pieces typically cover castles or other monuments such as Durham Cathedral pictured on the tallest of the vases (14″ tall).

These pieces can be bought relatively inexpensively, as many I presume imagine them to be transferware rather than handpainted pieces.

There is no special backstamp to these pieces as you can see from the image above, yet each carries the name of the subject to the body, save the Durham Cathedral piece which is titled to the base.

These rather simplistic designs particularly appeal, especially given the time they were produced when tastes were much more frivalous and over the top!