We are all no doubt familiar with the archetypical image of an old couple living out their time together quite contentedly and of course that is where the label ‘Darby and Joan’ originates.

Royal Doulton’s great modeller Leslie Harradine will certainly have been familiar with the many paintings and images of this famous pair including this image…. 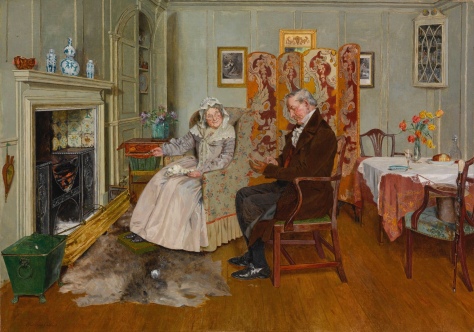 …with its stark similarities to his figures. As you can see both Harradine’s figures and the figures in the painting are dressed in 18C dress and it is from this time that the saying was in common use. 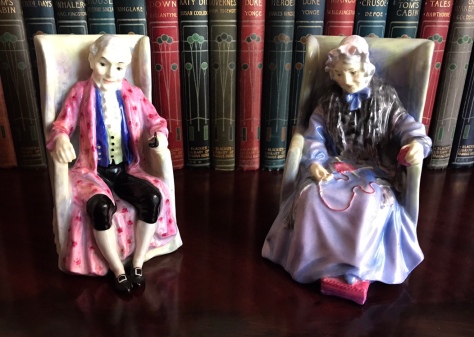 This charming pair were introduced in 1930 and withdrawn at some point during WWII, before being reintroduced with a band of their most popular figures with a new HN number and paired down detail in the modelling. The latter were in production from 1949-59.

Between 1977 and 1982 Royal Doulton released this selection of twelve dancers of the world, each in a limited edition of 750. As with all of Peggy’s figures, the range proved highly popular and collectors today are equally enthralled by the movement and spirit they embody. Interestingly, it was not Peggy but in fact Bill Harper who originally suggested theseries and he even produced two figures before the concept was completed by Peggy. These exquisitely researched and executed figures represent all four corners of the world: Africa, America, Asia and Europe. 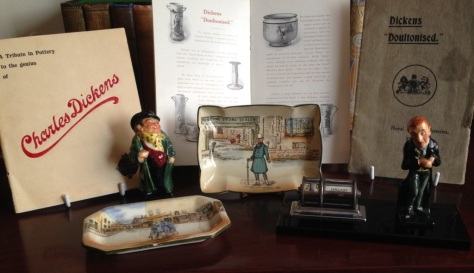 Some early Doulton advertising booklets for Dickensware ca. 1912 – the Centenary of Dickens’ birth, together with  2 seriesware trays a calendar with a Dickens figure and an early Tony Weller

When it comes to the works of Dickens, Charles Noke, Doulton’s art director at Burslem was blatantly a fan if not obsessed by all things Dickens.

A facsimile of a letter from Dickens’ son to Doulton & Co. expressing his pleasure at their Dickens range

From the early 20th century and throughout his time as art director and even after, Doulton have produced a wide variety of wares to commemorate Dickens’ works. 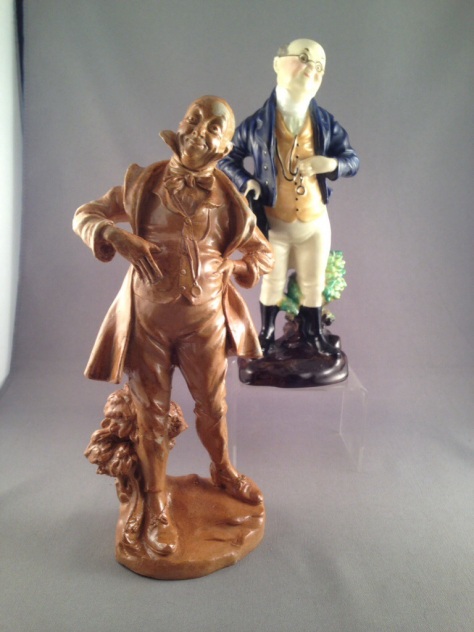 Another of Harradine’s Prototypes, this time the full size Dickens figures, together with an early Mr Pickwick HN556
Here is a glimpse at the sheer variety of wares produced by Doulton, the majority under the direction of Noke himself! 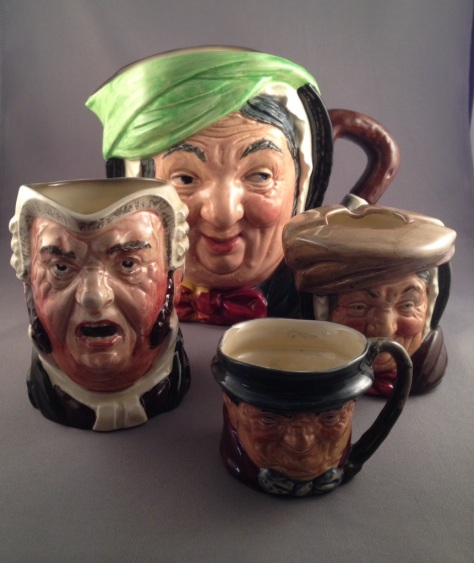 This is but the tip of the so-called iceberg and there are many collectors throughout the world who share Noke’s enthusiasm for all things Dickens. I have been lucky enough to see two huge collections outside the UK, but why not share any unusual finds to our facebooks page? Search for:

See you there!
Christopher

Much has been written about Leslie Harradine over the decades since the resurgence of interest in Doulton art wares. Whilst acknowledging the great contribution other authors have made, I hope to settle a few inconsistencies and misnomers over the coming articles about this most versatile of home grown Doulton artists. I am of course indebted to my late friend Jocelyn Lukins, for whom Harradine became something of a passion as she researched his life over many decades, actually meeting a daughter of his, from his second of three marriages, and her son who bought examples of Harradine’s work from her.

Arthur Leslie Harradine was born in 1887 in Clapham, London, the son of a solicitor. In 1902 at the age of 15 he began an apprenticeship at Doulton as a learner modeller under the tutelage of George Tinworth and John Broad, although he also assisted Mark Marshall and Frank Pope at this time too. He would late remark about his experiences at this point in his life that he wished ‘he (Tinworth) would give up those dreary religious plaques and concentrate on mice and frogs’. Perhaps providing us with a clue not only into his own artistic preferences but also into his personal beliefs too.

During this early training Harradine attended evening classes at Camberwell School of Art under Albert Toft, who ironically would provide the model W. S. Penley as Charley’s Aunt HN35 to what would become the HN collection, that Harradine himself would influence so dramatically only a few years later.

In 1908 suffering from the confines of factory life, Harradine left Doulton at the end of his apprenticeship and unexpectedly set up as a poultry farmer in Hertfordshire with his brother Percy. Naturally he set up a studio there and continued the link with Doulton by sending in over eighty different models for them to reproduce as slip cast art ware. The list of items sent varied from figure groups to vases to child figures. These early piece demonstrated perfectly his ability to interpret people from all walks of life and all cultures.

With the outbreak of World War I in 1914 Doulton’s art ware production was curtailed and so Harradine decided to emigrate to Canada with his brother, where they acquired 4000 acres of farming land in Saskatchewan. The open spaces suited both brothers and Harradine continued to model pieces but alas could not fire them. In 1916 the brothers enlisted into a Canadian regiment, Lord Strathcona’s Horse Regiment and saw action in France. Leslie had three horses shot from under him and unfortunately the last fell on him, injuring his leg, resulting in his being ‘invalided out’ after long spells in hospitals convalescing.

Two of Harradine’s large size Dickens figures made at Lambeth

By the end of the war family life had added a new dimension to his bohemian life. With a wife and a daughter, with two more daughters to follow, Harradine became a freelance artist to support his young family; continuing to do models for Doulton’s Lambeth works.

Mr Micawber made at Lambeth. The brown glazed version is much more unusual, although perhaps less popular than the usual white glazed figure

And so the first chapter of Harradine’s association with Doulton comes to a close. In the next we will look at how new links were established with Doulton at Burselm and the great influence he made on the HN collection for Doulton.

I thought you might all like to see this extra montage of the Queen’s visit to Royal Doulton at Burslem in 1949, when still Princess Elizabeth. Of particular interest is some Seriesware inspired by Brangwyn ware and also the decorating of figures from this period and a comprehensive display of them! Well worth a look!