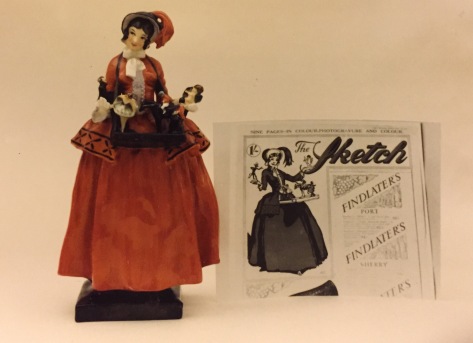 This wonderfully detailed figure was commissioned by The Sketch magazine and consequently has no HN number or official title to her base as she was simply made for advertising purposes and not for sale to the general public. In the early years of the HN collection several advertising and publishing houses commissioned Doulton figures to advertise their products including The Perfect Pair HN581, which celebrates the amalgamation of Eve magazine and The Tatler from 1923 and another famous figure the Standing Beefeeter, which carries no official name or HN number, and who was made to advertise The Illustrated London News in 1924.

The figure of Miss Sketch appeared on the front of the magazine and Doulton’s study is a very faithful copy of this peddler lady. In her tray she carries miniature figures representing the subjects covered by the publication: a ballerina for the theatre: a jockey for sport: a cupid for love stories: a soldier for current affairs and a devil who represents devilish satire.

A letter has been discovered preserved inside of one of these rare figures. The letter from the Sketch magazine is dated 1927 and was sent presenting the winner of the magazine’s cross- word with their figurine as a prize. What a wonderful treat?