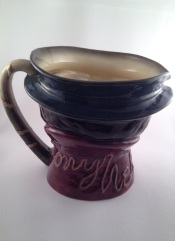 In the immediate years before the outbreak of WWII, Royal Doulton were avidly addidng to their many successful series of figures, seriesware and of course character jugs. Items from this period are amongst the most sought after of the Doulton wares, simply because the outbreak of war interrupted or halted production completely of many of these lines.

This small group of five musical character jugs, fall into this category. Production of these musical jugs was interrupted by the outbreak of the war and musical jugs were probably not made long after its commencement, given their scarcity in today’s market place. This is borne out particularly by the scarcity of the Old King Cole jug.

Each of these jugs is fitted with a ‘Thorens’ Swiss movement and the title of the melody it plays is printed around the base of the jug.

Detail to the base of the Tony Weller jug.

The details of these five jugs are as follows:

‘Here’s a Health unto His Majesty’

‘The Campbells are Coming’

(a yellow version of this last title exists) 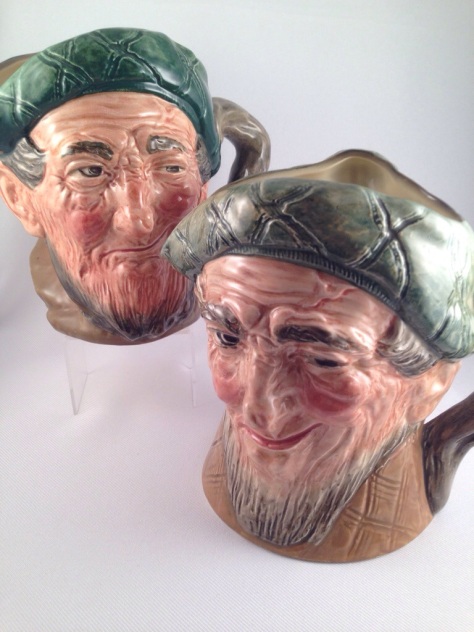 Two versions of Auld Mac. On the left is an ‘A’ mark version ca. 1950’s and on the Right is a musical version. 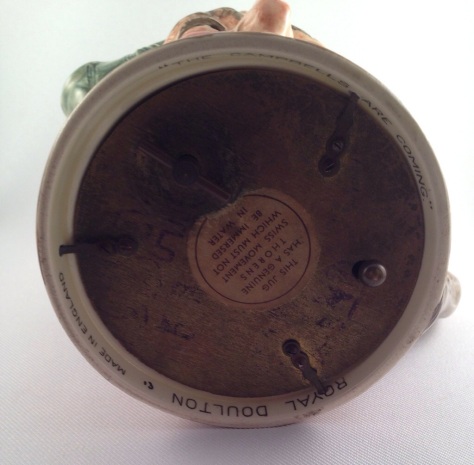 Derivatives form an exciting sub-theme for collecting and other derivatives including bookends, busts, teapots, milk jugs and sugar bowls exist.