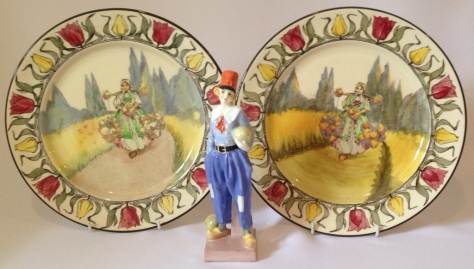 In the first three decades of the 20th Century there was a real vogue for all things Dutch! No one today can quite explain this phenomenon but it reached all parts of British life with adverts featuring people in Dutch dress to the famous London store Liberty of London selling Dutch inspired gift ware. My own explanation is that it was perhaps that the traditions in a Holland were still so strong whereas they had been lost in many other European countries by this point in time.

Nevertheless, Doulton were certainly on this band wagon creating their famous seriesware pattern Dutch Harlem, a variation if which was even made specifically for Libertys! 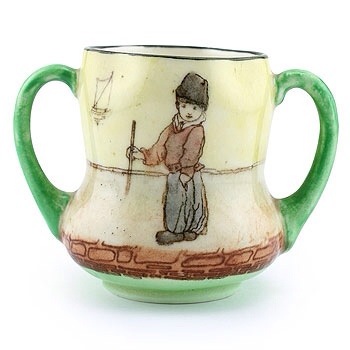 A miniature tyg in Dutch Harlem.

Equally charming are the two seriesware plates at the top of the page, with a deco Doulton figure named Derrick also in Dutch dress.

Doulton’s figure range contained a handful of Dutch figures, all the inspiration of Doulton’s famous modeller Leslie Harradine and all dating to the 1930’s.

Here are Gretchen and Annette.

And here is a colourway of Gretchen from 1930.

A child group entitled Willy-Won’t-He was also introduced in 1933.

Other Doulton wares featured Dutch scenes such as this rustic Holbein ware vase painted with a windmill scene. 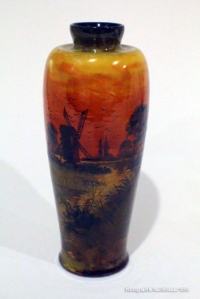 This vogue for all things Dutch seems to have stopped at the end if the 1930’s but these charming pieces serve to remind us of these halcyon days.