Here are three versions of the hard to find figure Jacqueline. Designed by the great Leslie Harradine, Jacqueline was available as HN2000 and HN2001 between 1947-1951.

The red is a new find, a colourway, with ‘HA3’ to it’s base telling us that it was painted by Harry Allen and this is colourway 3. Presumably 1 and 2 were the two colourways produced in pink and blue pictured either side of her.
Jacqueline is model 1234 telling us that whilst she was introduced in 1947, she would have been modelled in ca.1942. I have versions of models 1230 (Christmas Morn) and 1231 (a prototype similar to Easter Day) dated 1942, so we can date the model quite closely. 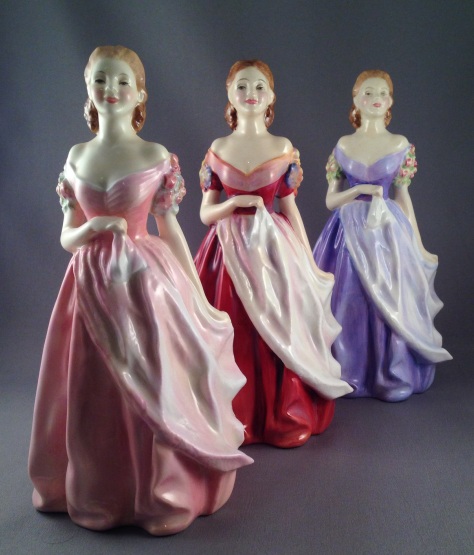 The part of collecting that I find most interesting is often the story behind the piece. Although I have not found a pictorial inspiration for Jacqueline there is still plenty to be researched as you can hopefully see above.