It seems hard to believe today that powder boxes and their like we’re once a staple on every well-to-do dressing table. These halcyon times seem a very long ago now, but back in the 1920’s and early 1930’s Doulton were producing such boxes for well-heeled ladies! 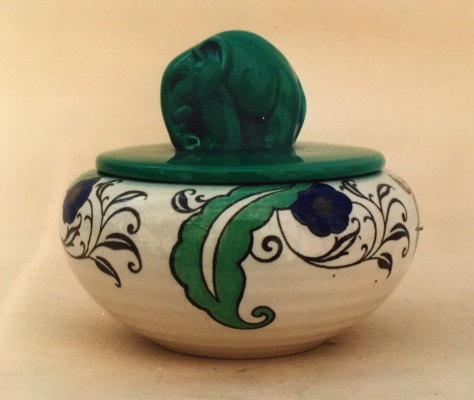 Elephant finial on base featuring the Veridian seriesware pattern.

Even before the 1920’s a couple of early figures in the HN collection were adapted as powder bowls, typically with the bowl being the lower part of the figure’s skirt. The Flounced Skirt and Lady and Blacksmoor are two such figures that were adapted as powder bowls, with examples of the former turning up bearing the Dubarry name to her base; the famous perfumier and cosmetics manufacturer. The name Dubarry may be familiar to Doulton collectors as Doulton also produced ceramic atomisers and some specifically for Dubarry.

Other powder bowls featured figures simply incorporated into the lid of the piece, such as Cassim or The Japanese Fan.

The Japanese Fan as a powder bowl finial. This figure can be found on a rounded bowl too.

Still further examples feature early Doulton animals including these charming, rare character birds that lend them perfectly to this purpose and as decoration to many desk accessories and even place setting or menu holders. 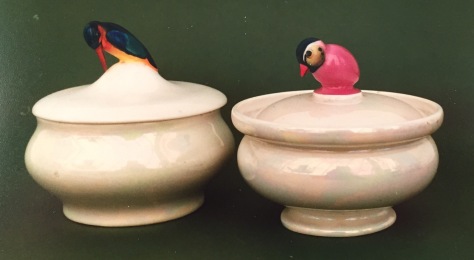