As soon as the term colourway is used, many suddenly think of the unique and unusual. Doulton, however, seem to have had a much wider view of the term. Certainly during the inter-war years of the 1920’s and 1930’s many figures were available in colourways to compliment existing figures in the range. Take for example the selection of two-tone green figure: Barbara (HN1461), Paisley Shawl (HN1460), Patricia (HN1462), Miss Demure (HN1463), Sweet Anne (HN1453) and Victorian Lady (HN1452).

Clearly this set was produced to compliment one another. Other such sets include Sweet Anne(HN1496), Dorcas (HN1558) and Priscilla (HN1559); 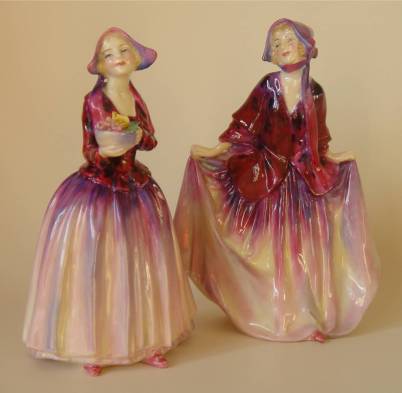 As can be seen from the illustrations here, even the ‘M’ range figures reflect this trend. Child figures too can be group together in complimentary colouring such as Monica (HN1467) and Marie (HN1635) below.

A clear favourite colourway amongst  collectors has of course always been the ‘red’ figures and this began in the 1920’s when figures such as Spanish Lady (HN1294) and then later Marguerite (HN1948) and Christmas Morn (HN1992) began to appear. A paricular favourite of mine has always been Pantalettes (HN1709) seen below.

Whatever your reasons for collecting, once you have a sizable group of figures you are sure to find a theme or group that will help create your perfect display and of course that is part of the fun of collecting – how to display your collection to its best advantage.

If you have any particular groupings that you have put together please write in with a picture for us to all share!