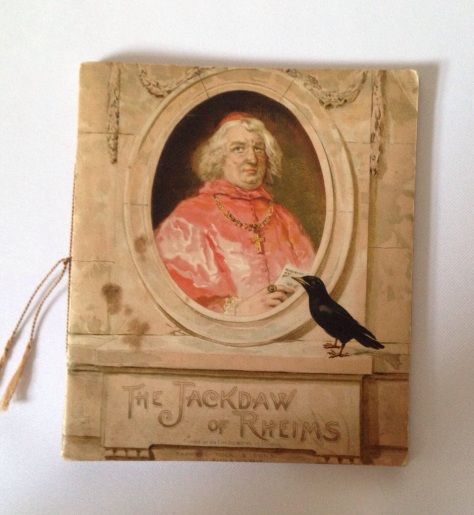 The cover of an early pictoral edition of the poem.

Doulton’s seriesware pattern the Jackdaw of Rheims is of course based on the Victorian poem by Thomas Ingoldsby of Tappington Manor, actually a pen-name of an English clergyman named Richard Harris Barham, and his verse is famous for its wit and heroic tales. Of the many Ingoldsby legends this is perhaps his most popular and so it is no surprise that Doulton chose to base a seriesware pattern upon this story.

A page from a Doulton catalogue advertising this story ca. 1906.

The story starts with a scene at the Cardinal’s Court in Rheims, where a stately feast is taking place, thereafter the cardinal’s ring mysteriously disappears, a fearsome curse is then placed by him on the unknown thief, it’s terrible effect is seen upon the poor jackdaw and finally the jackdaw’s return to favour are vividly described for us.

A pair of early sugar bowls.

These colourful incidents provide the inspiration for Doulton’s series and lend themselves so well to pictorial illustration as can be seen. First introduced in 1906 there are typically an array of scenes and shapes to collect.

Three views of a large fruit bowl including the inscription around the inside edge of the bowl.

Today this seriesware pattern remains amongst the most sought after and more unusual shapes and scenes can make a considerable dent in the wallet.

Doulton described the series as a”Keramic Edition” of this famous tale and so it is, with sections of the verse used as part if the illustrations.