Original poster for the opera.

Leslie Harradine as well as establishing a new standard in figure modelling in the early 1920’s, was also responsible for the first set of figures, The Beggar’s Opera Series, inspired by the theatre. Harradine’s figures all closely resemble the costume designs Claude Lovatt Fraser the designer for the revival of this piece at Hammersmith in 1920, as you can see from these pictures in the article. 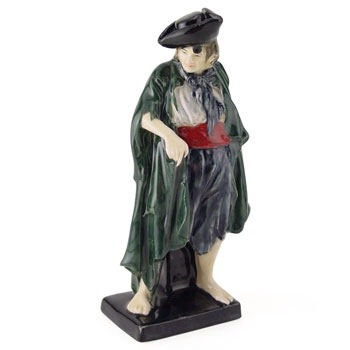 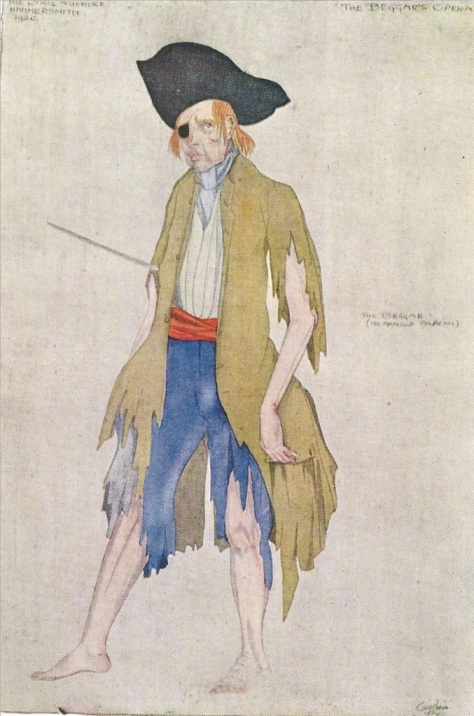 Harradine’s The Beggar and the original sketch for the stage costume.

Once made up Lovat’s costumes were thrown to the studio floor and walked on, had paint thrown on them, and where necessary as with the Beggar’s costume, were then slashed and dirtied. He reasoned that the characters from the play were from 18th Century London low life and spent much of their time in jail.

Again the original design and the Doulton figure Captain Macheath.

This first series of figures set the tone for future sets by teaming a popular English theme together with an emerging Doulton house style of decoration.

The series proved a huge success and in Doulton’s first official publicity catalogue after WWII, they themselves lament the withdrawal of this popular set! The main female character Polly Peachum is also immortalised in a miniature version, and incidentally more colour variations of this one miniature figure exist than any other!

Two versions of Polly Peachum against her original costume design. Incidentally the curtsying Polly was at first called Polly Curtsey.

Whether you collect just individual characters from this series or the whole set, they make an eye-catching display!

A favourite colourway of mine for Polly Peachum.