Thanks to Harvey’s Collectibles for the above picture of a pair of vases in their collection. Dating to 1900-02 they are not easy to find and I have seen the same pattern on a pink body only once before.
Interestingly they are from the Robert Allen studio at Burslem as is confirmed by the RA number to each of their bases. The numbers relate to design books and we are able to date items using these RA numbers. 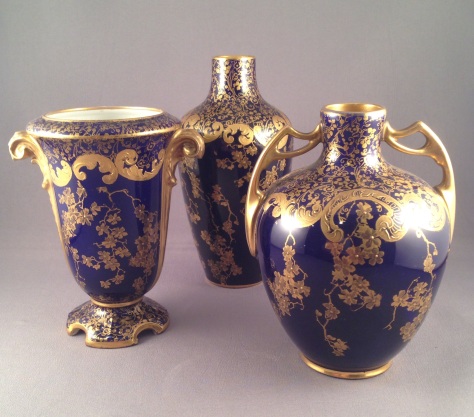 Above and below are further examples of gilt silhouette flowers and foliage from the Robert Allen studio and date slightly earlier to the late 19th Century. The miniature vase below is more typically found in white and light blue rather than cobalt and gilt.

This final vase illustrated Doulton’s ability to change and adapt designs as this is usually found decorating toilet sets rather than gilded cobalt blue vases!