No other area of Doulton offers more scope than the collecting of miniatures and Doulton’s Lambeth factory created the lion’s share of these miniatures.
Not including cruets, bird feeders, advertising items, inkwells, teawares and many other lines that were produced in a small scale, as you can see above there are numerous vases, flasks, containers, whimsies and other items that can be found in miniature.

Doulton’s famous Huntingwares, produced over many decades, are perhaps the most easily found but again many subtle variations exist. Brown, green, blue and metallic glazes can be found decorating them as in the picture below.

These items can be found with silver or plated silver mounts in a variety of shapes.
Other such applied patterns can also be found if you have a keen eye including a Willow design and the rare Naval reliefs.
Many of these miniatures were perfume bottles. Here on the left is one such example for the old London department store Jason Shoolbred & Co and these were stamped as such to their bases. 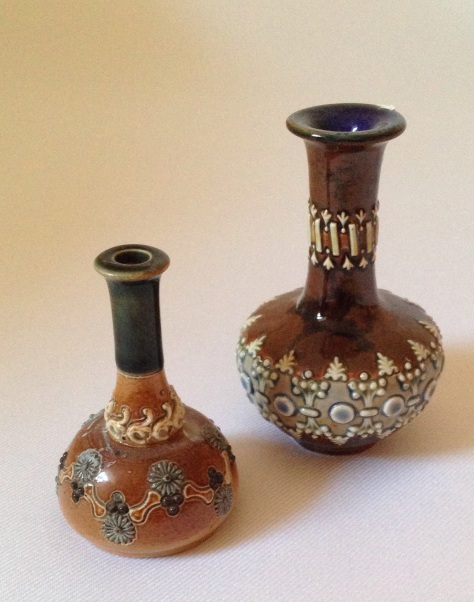 Naturally many typical art wares can be found in miniature like the vases and ewer above and there are some examples above including the Mark Marshall rabbit paperweight, again pictured above.

Other lines containing miniatures are the simulated wares such as blackjacks and also the many commemorative wares produced to mark events over the years. A particular favourite are the Nelson miniatures!

Perhaps you too collect miniatures, if so why not share a photograph on our Doulton Collectors Group Facebook page!