Around the turn of the 20th Century there were many exciting introductions at Doulton’s Burslem studios, many the brainchildren of the famous Charles Noke.

Holbein ware is a typical example of Noke’s experimentation with glazes. Holbein wares give the impression of old masters through the use of yellow, green and brown slip on a cream earthenware body. Portraits on these vases were typically by Harry Tittensor and Walter Nunn among others.

Incidentally this name of ware was also given to a series of items including candlesticks and oil lamp bases modelled in an art nouveau style but not bearing any portrait!

This ware had a special backstamp but it was not always used, creating certain confusion about this particular ware. This ware should not be confused with Rembrandt ware. 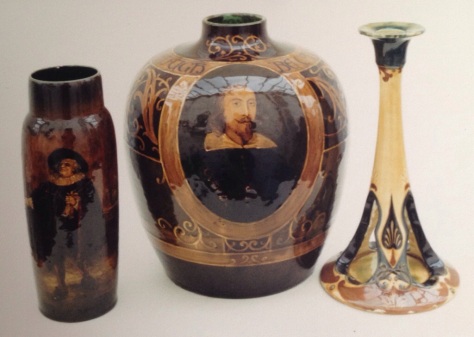