As all figure collectors know, during the design process prototypes followed by pilot figures are produced and these models can change in their modelling quite simplistically or quite dramatically at this early stage.

Here is a prototype I once saw and then a few months later saw a version with her holding a mask rather than the mirror you see below. 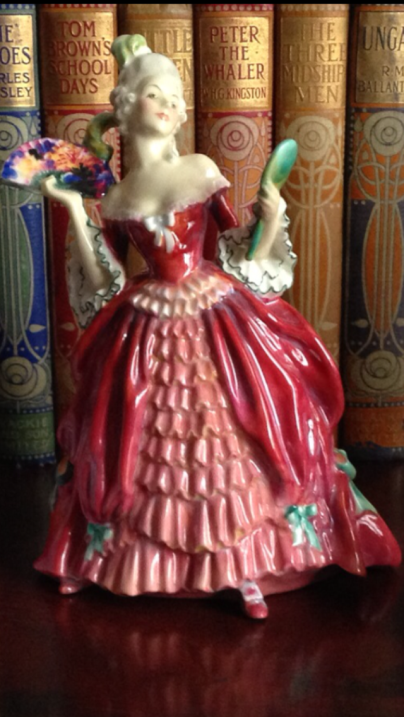 However, once a figure has gone into production that does not mean that further adaptation and transformation is not possible nor can this be ruled out!

At no other time and to no other group of figures does this more aptly apply than to those of the 1920’s and 1930’s. With production dates for this period being so sketchy one can only attempt to draw conclusions as to the precise dates of withdrawal and sometimes even introduction.

Sweet Maid (above) became Millicent (below) 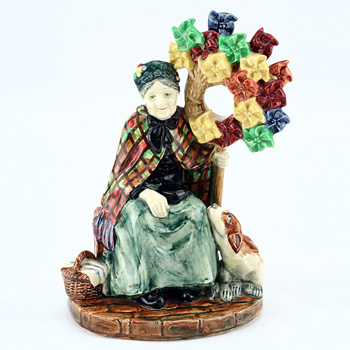 The Windmills Lady (above) who became Old Lavender Seller (below)

The scarcity of the former in both cases suggests that the latter may have replaced these earlier models. Then again, we have The Windmill Lady HN1400 (1930 LH) and The Old Lavender Seller HN 1492 (1932 LH). Clearly the old lady is the same in both figures with minor adaptation. Both figures were produced simultaneously, as were the Rustic Swain HN 1745 (1935 LH) and Midsummer Noon HN1899 (1939 LH). It was not just Harrading who adapted their own earlier models. 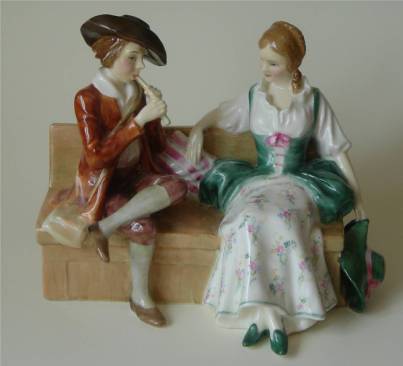 The Rustic Swain (above) which became the solitary Midsummer Noon (below) 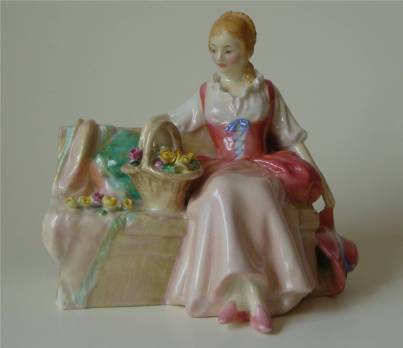 However this tendancy to adapt existing figures can be traced back to even the earliest times of Doulton figure production in the early 20th Century and then the introduction of the HN figure range. Consider Noke’s reintroduction of the many Jesters he had produced earlier in Vellum and then Tittensor’s Pretty Lady HN69 (1916 HT) and The Parson’s Daughter HN 337 (1919 HT) which both have clear similarities in the modelling of their skirts. 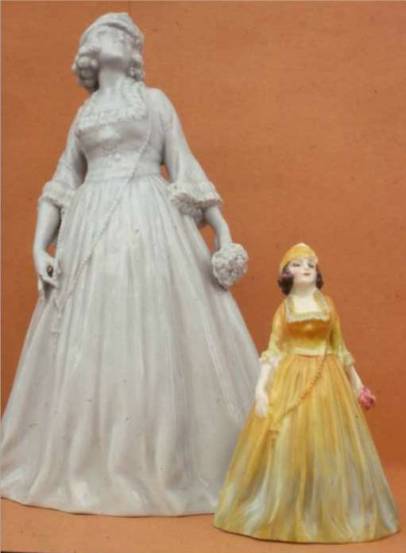 Here we have a hard paste porcelain version of Doris Keane by John Broad made at Doulton’s Lambeth factory in the early 20th Century, together with her miniature self M32 made at their Burslem factory in the 1930’s

It is worth noting a little something about the production dates given to figures and that in my experience the date of ‘by 1949’ is rarely the case, indeed ‘by 1944’ would be much more accurate, with the exception of a handful of the most popular figures of the time such as Paisley Shawl HN1392, Autumn Breezes HN1934, Top o’ the Hill HN1849, The Orange Lady HN 1759 and Biddy Penny Farthing HN1843, whose production continued into 1944 and was resumed soon after the end of WWII principally , if not solely for the export market; more precisely for the USA and Canada.

China flower arrangements are currently out of fashion and seem to belong to an era in which our Grandmothers filled their shelves with such fancies. Certainly the older ladies one imagines to have collected such things, themselves seem like a distant memory. No doubt the skill and ability to hand craft such fancies is alas all but extinguished now too. However, such flower bowls were produced for a much longer period than most collectors would expect.

A group of rocks with floral decoration. All are dated

The 1920’s with all their jazz and style appear to be when Doulton first began production, as the catalogue page from 1933 pictured, testifies. Indeed we can also see each creation from this time is given a ‘FB’ number (presumably flower bowl?). Also illustrated are, a selection of weird and wonderful bowls of the 1930’s, together with some napkin rings of the same time. As with almost all Doulton wares, we can presume that production of these flower bowls ceased with the outbreak of World War II, whilst the napkin rings popularity continued into the immediate post war period.

Typical flower bowls from the range and illustrated

on the catalogue page above

As with so many things produced at this time, you can never predict quite what you will come across next, indeed I recently found a lidded bowl with flowers mounted on it dated 1936. Happy hunting!